We all know that art is not truth.  Art is a lie that makes us realize the truth.

The above image Still Life with Compote and Glass, a painting by Pablo Picasso, coupled with the quote above, help me think about the relationship between the art of memoir and truth.  What is a painting beyond strokes of paint on a canvas? And what is a memoir beyond a story of what happened? They are both an interpretation.

In the memoir essays I write, the story is not only about what happened.  What happened is a frame; the narrative is a vehicle to deeper meaning.  Patricia Hampl in “Red Sky in the Morning” explains that memoirists should strive for universality in their own writing—

Memoirists, unlike fiction writers, do not really want to ‘tell a story.’  They want to tell it all—the all of personal experience, of consciousness itself.  That includes a story, but also the whole expanding universe of sensation and thought that flows beyond the confines of narrative and proves every life to be not only an isolated story line but a bit of the cosmos, spinning and streaming into the great, ungraspable pattern of existence (18).

This idea, that a memoirist wants to prove every life is part of the cosmos, sounds idealistic and somewhat new-agey, but what Hampl says rings true to me.  I don’t want to merely tell my own story.  I want to tell a story that other people can relate to and find truth in.

One of the topics I write about in my manuscript is the story of my father’s imprisonment when I was a child.  My father spent six years in federal prison for either drug trafficking or money laundering or both.  My intuition tells me he went to jail for both, but I’m not sure.  I know little about him, except for the fact that I have his wide teeth and knobby kneecaps. But I do know he sent me letters from a federal penitentiary. I just don’t know exactly why he was there. I called the DEA and requested for the court records, but I need my dad’s permission, permission I haven’t asked for because I am not ready for that awkward conversation.

Most readers may not relate to having a father in prison, but they can relate to wanting to know more about a mysterious person.  Many people are curious about who their parents were before they were born.  My story speaks to this.  Why do I want to know about him?  Why do I want to understand him?  Why do I feel that if I understand him I will understand myself?  That’s my story—not the fact that I had an unconventional childhood or that I was a sad eight-year-old. 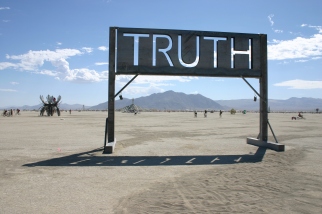 What matters is the truth of the story I want to tell, and for a memoirist truth comes in many forms: facts, memories, craft features, and universal experience.

What do you think?

Hampl, Patricia. “Red Sky in the Morning.” I Could Tell Your Stories: Sojourns in the Land of Memory. New York: W.W. Norton & Company, 1999.

10 thoughts on “Becoming a Credible Memoirist—Oxymoron?  I Think Not.”